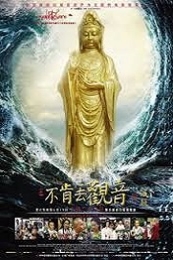 During the Tang Dynasty (618-907 CE), a young Japanese monk Hui�e (played by popular actor Nakaizumi Hideo) was tasked with the royal mission of bringing back a fabled Guan Yin (Avalokiteshvara) rare-colored ceramic figurine to Japan. This fabled figurine had originally been commissioned by Prince Guang�s mother to bless and protect her son from repeated assassination attempts by the ruling despotic Tang emperor. However, old master craftsman Yu failed in his numerous attempts during final stages of the kiln-firing process. One day, master Yu finds an infant girl in a basket, floating on a lotus pond nearby the kiln, and decides to adopt her, naming her as Little Lotus. The very same day, the rare-colored Guan Yin figurine was successfully produced by master Yu. Since Little Lotus was found the same day the Bodhisattva figurine was produced, villagers regarded her as the human incarnation of Avalokiteshvara. True enough, Little Lotus (played by the lovely actress Li Chun, known for her role in The Flowers of War, starring Christian Bale) grew up to be a beautiful young woman known for her great compassion towards everyone, including bad hats. The lives and paths of Prince Guang, death squads sent by the Tang emperor, Little Lotus and Buddhist monk Hui�e intersect (a la Cloud Atlas) repeatedly, climaxing in the stormy sea (literally) off the coast of Mount Putuo. Clever use of CGIs combined with martial arts scenes makes this dramatization of Mount Putuo�s 1000-year legacy as a sacred site of Buddhism worth watching.
Sedang Proses...